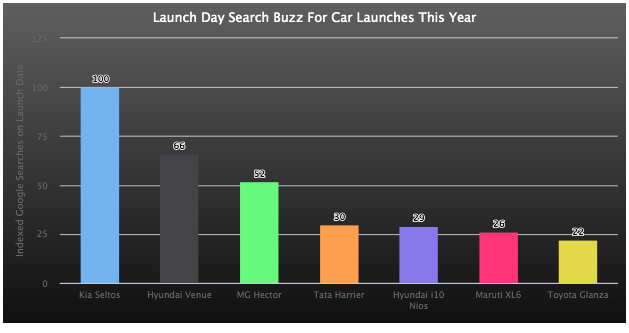 To overcome the downturn in demand, auto manufacturers have resorted to multiple launches to incite buyers. This year has been fraught with launches in SUV segment where cars like Tata Harrier, MG Hector, and Kia Seltos have been announced which have taken on the likes of XUV500, Jeep Compass, and market leader Hyundai Creta. Using Deepflux™proprietary automobile launch dashboard, we compared the success of these launches.

The much-awaited Kia Seltos launch on August 22 had the highest digital echo among all launches this year. Google searches which are one of the biggest leading indicators of car sales always peak during the day of the launch of a car. Kia Seltos saw the highest searches for a car seen on its launch day. This beat the previously highest searched Hyundai Venue launch which was announced in May by a factor of 1.5X.

Kia Seltos has often been compared with MG Hector, especially as this marks the entry of the brands in India. MG Hector had a spectacular launch on June 27 and received more than 500 social mentions on the day of launch which was further accelerated by YouTube Masthead. This translated to 10,000 bookings for the car till the day of the launch. The Kia Seltos launch bettered this and received more than 900 comments on August 22nd launch. This has also meant that it received nearly 35,000 bookings till launch date which is significantly higher than Hector.

At DeepFlux, one of the key metrics in the prediction of car sales is the engagement and video views of influencer reviews of the car. Tata Harrier and MG Hector had achieved more than a million video views on the AutoCar India first drive review in less than 30 days. The interest in Kia Seltos can be seen by the fact that it is estimated to cross 1 Million video views in nearly 15 days which is nearly twice as quick as Tata Harrier.

The thing to watch out in the coming days would be the ability of Seltos to sustain the momentum. Hyundai Venue which has overtaken Brezza in the SUV B Segment is finding it difficult to sustain its lead over Brezza in various digital metrics. It would be interesting to see if both Setos and Venue can continue to dominate the existing leaders or their digital buzz fizzles out with time.

It would be interesting to see if both Seltos and Venue can continue to dominate the existing leaders or their digital buzz fizzles out with time. To get more insights on a real-time  dashboard, drop us a mail at contact@deepflux.io